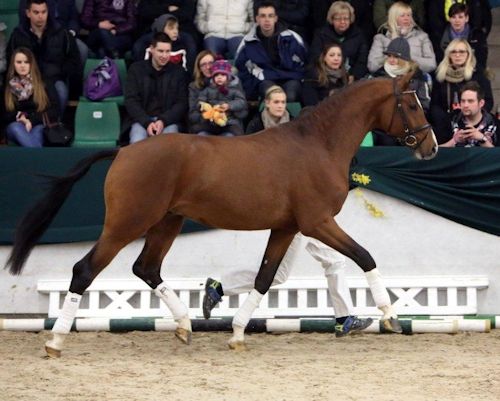 Coronet D’Honneur is a 2010, 16.3, RPSI approved Bavarian Warmblood stallion. He’s by Comme il faut (Coronet Obolensky x St.Pr.St. Ratina Z,) out of Dorina (Dinard x St.Pr.St. Paola/Pilot.) “Honor” was the Reserve Champion Jumping Stallion at the 2013 South German Keuring in Munich, and stood at the Zweibrucken State Stud for the 2013 breeding season, while preparing for his 70 Day Stallion Test. His first foal crop was impressive, producing Premium foals, as well as the Site Champion at one of the largest inspections in South Germany. He completed his 70 Day Test at Marbach, Germany in the Fall of 2014 with exceptional comments, and 9’s in all the Jumping and Temperment scores. He was 2nd overall in Jumping, out of over 20 stallions. He has an incredibly kind disposition, and brings scope and bloodlines previously unavailable fresh to North America. He will prove to be an interesting new option for hunter breeders, as he also has the movement that will win the flat classes, coupled with the athleticism to produce Derby and big ring hunters.   Honor’s first foals have already exceeded our expectations, with Coronet’s Andros winning the 2016 Sallie Wheeler RPSI Championship, and Coronet’s Althea winning the 2016 Zone 8 Championship!  Honor also ended up the 2016 RPSI Champion Stallion, based on his mare and foal inspection scores- we couldn’t be more pleased with his achievements so far! 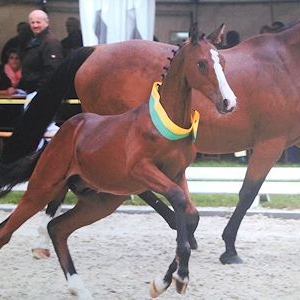 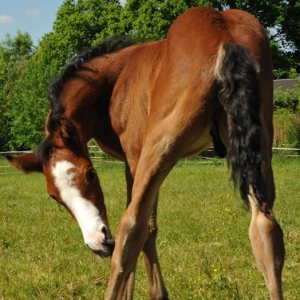 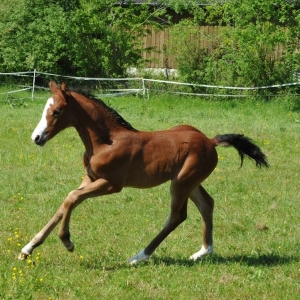 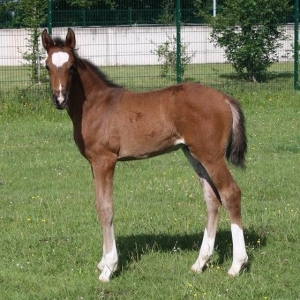 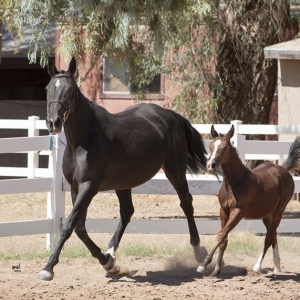 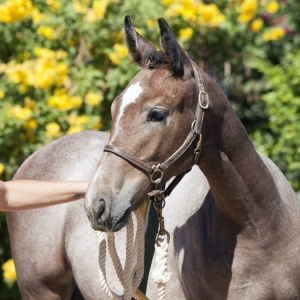 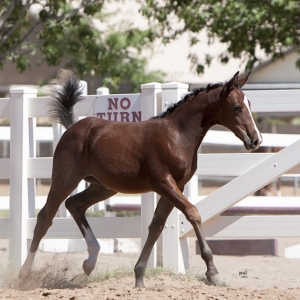 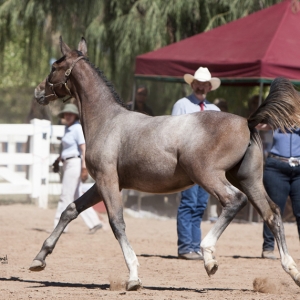 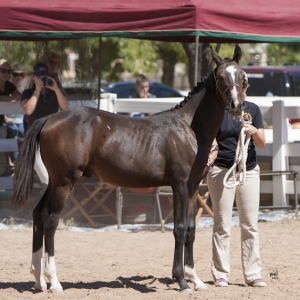 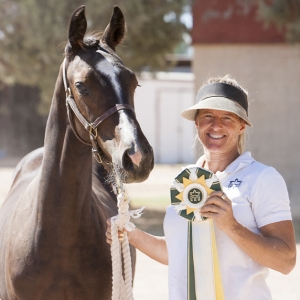 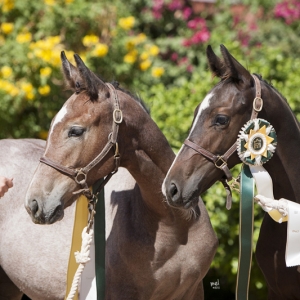 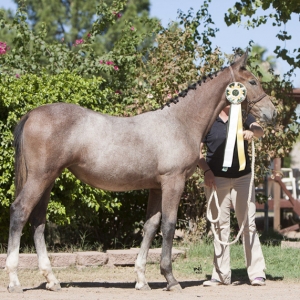 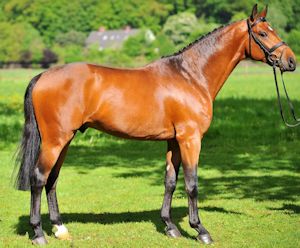 Honor’s sire, Comme Il Faut was presented at the Westphalian licensing in 2008, out of the famous Olympic “Ratina Z (Ramiro Z x Almez Z) He passed his 70 day test with the highest jumping index of of 140.25, Coronet Obolensky, Honor’s grand sire, is one of the hottest up and coming young stallions in the world. At only 7 years old he has already reached international competition. The highly elastic motions and superb uphill gallop are well combined with jumping qualities that are hard to equal in respect to capacity, leg technique and manner of jumping. This special predisposition is clearly predetermined by his first class pedigree. His sire Clinton, son of the international icon Corrado I (Franke Sloothaak), himself a highly successful international show jumper, not only combines the premium national stallions Cor de la Bryère, Landgraf I and Capitol in his pedigree but furthermore derives from Holstein bloodline 8829.

The damsire, Heartbreaker, who was victorious in World Cup events, is a son of the probably most prominent Dutch sire of show jumpers of the past 20 years, namely, Nimmerdor. The grandam, a successful advanced class show jumper, produced the victorious international competition sports horse Querido (by Feinschnitt I). Her sire Randel Z, a son of Thieß Luther’s successful international competition sports mare Alarie Z, inter alia, brought forth the international dressage horse Nector (Ingrid Klimke). 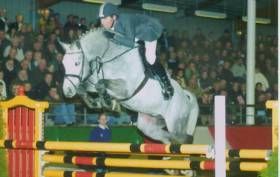 Cornet Obolensky was declared vice-champion and the darling of the public at the main Northrhine Westphalian approval of 2001. He absolved an exceedingly good 30 day test with an overall score of 8.33, as third of his test lot, leading the field in show jumping with the score of 9.24. He was moreover awarded the top score of 10 for loose jumping. 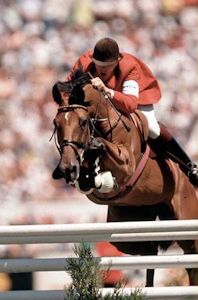 Ratina Z was bred by the Zangersheide Stud in Belguim, a stud known for producing outstanding jumping horses. Sired by Ramiro Z and out of Argentina Z, Ratina Z was no exception, as she soon proved under Olympian Piet Raymakers. Riding for the Netherlands, Raymakers guided Ratina Z to a silver medal at the 1992 Barcelona Olympics. Beerbaum then took over the reins and won the World Cup in 1993, followed by team gold at the 1994 World Championships.

Ratina Z continued to represent Germany under Beerbaum by winning numerous international competitions, including the Grand Prix of Aachen, in which they guaranteed a gold medal for Germany. At the same competition, Beerbaum was gunning for an individual gold as well, but Ratina Z suffered an unfortunate injury and was off the circuit for months.

Always the fighter, Ratina Z came back impressively to earn a double title at the 1997 European Show Jumping Championships in Mannheim, Germany. Beerbaum continued to campaign the mare successfully until 2000, at which point she was retired in an emotional ceremony.

Ratina Z will live out her days as a broodmare at Beerbaum’s home at Riesenbeck Rush. Today, this effervescent mare is regarded as a legend. Almost every article that mentions her calls her “a dream,” “a legend,” or “a horse of the century.” She certainly has earned her spot in the record books, and perhaps what is more impressive than her long list of wins is the way she accomplishes them. 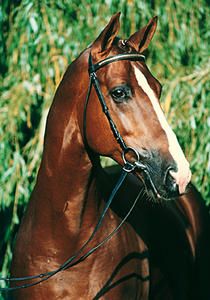 Dinard L has also established himself as a successful sire through the dam line. Late Night/ Edwona Alexander/AUS, who has competed successfully in Stuttgart, Hamburg and Aachen is one example. Twelve of Dinard’s sons are licensed stallions, among them “Bundeschampionat” (championship for young horses of all German breeds) winning stallion and performance test winner Dinaro, who also won jumping competitions up to class S. 23 of his daughters were awarded the title of State Premium mare.

Dinard L won bronze in the competitions for five- and six-year-old jumpers at the “Bundeschampionat” in 1993 and 1994. He achieved a high placement at the 1992 “Bundeschampionat” for riding horses. Dinard L comes from one of the strongest performing dam lines in Westphalian breeding. Dinard L’s dam, Verband Premium State mare Paddy, produced also Lagavulin (by Lord Caletto), a licensed stallion and successful international competition jumper, and his full brother, Lord Pilot (S*-class jumper). With Der Clou, she produced Dimanche, who won dressage competitions up to St. Georges level. Paddy is a full sister to the stallions Pit I and II and to Norbert Koof’s top jumper Prinzregent. 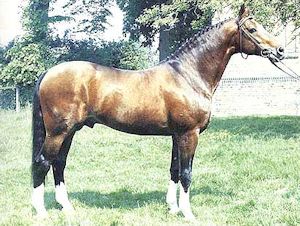 Pilot was the youngest showjumper millionaire that has ever existed among Germany’s stallions. By the end of 1999, Pilot progeny had earned a staggering DM 6,250,000.

Pilot’s breeding influence exceeds Westphalian borders. He is represented in almost all German breeds. In 2005, he was honored with a life-size monument in front of the Westphalian horse center in Münster-Handorf. Pilot has had numerous international Grand Prix winners, in the 1988 Seoul Olympics Pedro with rider Wolfgang Brinkmann was on the gold medal winning German, Pirol / Lesley Mc Naught, P.S. Priamos / Ludger Beerbaum and Dirk Hafemeister, Prinzregent 7 / Norbert Koof and many more.

Pilot continues to have a very strong influence in today sport horse breeding his offspring proven themselves to be amazing jumpers, outstanding dressage horses and talented hunters.

Crossroads Farms prized stallion, Coronet D/Honneur was the 2nd stallion in a jumping contest of 20.
MENU